The mission of the Calhoun County Agricultural & Industrial Society is to preserve its agricultural heritage; to foster connection between agriculture, business, education, industry and technology within the county and beyond!

In 1902, "Fair Lake" was constructed, which is now known as Duck Pond. The building of the grandstand followed in 1907. Then, in 1929, the fair was turned over to the Calhoun County Board of Supervision.

The fair survived the Great Depression and World War II, and followed with a "Centennial Celebration" in 1948.

In the early 1970s, the new "Boys & Girls Exhibitors Building" (currently known as the Belcher Building) and a show arena were built. The money for these projects was raised by 4H clubs with fundraisers, which included paper drives, car washes, and pencil sales, as well as by donations from businesses in the county.

Also in 1970, it was realized that the fairgrounds were not a high priority for the Calhoun County Board of Commissioners, and talk began of the possibility of selling the fairgrounds property. There was a public outcry in opposition to this idea and fortunately the fair manager, Lavern Russell, proved the fair very successful in 1971. Then a group of people met in Fay Owens' office in 1973, where the new Calhoun County Agricultural & Industrial Society was organized. Don and Virginia Furu borrowed $5,000 to help get funding started, and in 1974 the CCAIS leased the fairgrounds and ran its operations, eventually purchasing the property from the county for $1.

Through the years that followed, a new sheep and goat barn was built. The open class horse barn was remodeled, as well as a new roof on the 4H building. A new stage was built and a new roof was put on the grandstand. The swine barn received new doors and a new floor. The Merchants Building became home to the new "Peck Kitchen", and the old Boys & Girls Building (Belcher Building) was redone by the Youth Advisory Councils of Calhoun County. Land was purchased and houses demolished to make more room for parking and better camping, and new fencing was put up. The fairgrounds also built a new bathroom and shower facility.

To add to the historical aspect of the fairgrounds, the Houston School (built in 1836) was relocated to the grounds in 2005, as well as the Old Maple Grove Church in 2006 (built in 1901 and originally located at 18511 L Drive S in Homer) 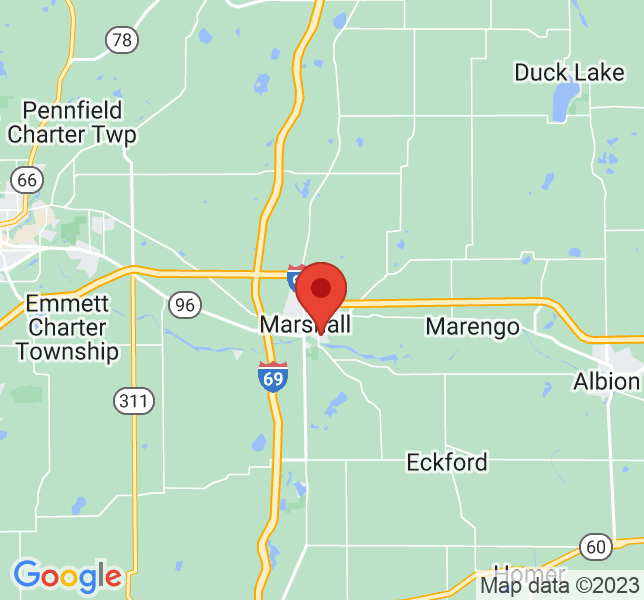